Now on to the just plain weird…Like many folks, we run trail cameras in order to census wildlife, as well as for security purposes. We have taken thousands and thousands of photographs over the years, and have never seen anything like the following…

Background: 182 photos on this camera. All pictures are "normal", except for 6 images on the morning of November 16th between 3:59 a.m and 4:02 a.m. What appears to be a light beam appears with an "object" floating within the beam appears. There is no movement from wind on the branches or grass, but the beam and object appear to move side to side, up and down and in and out from one image to the next.

If anyone knows of a reasonable explanation or similar experience, please contact us at info@Heartlandillinois.com

My name is Andreas Muller from Germany and I just saw your video on the 'unexplainable images captured by outdoor expert' on youtube.com

I do not know 'what' the strange object itself represents...BUT I think I can explain the kind of 'light beam' that seems to emerge vertical from the top and the bottom of the object. In my eyes these 'beams' represent a known digital effect, when light sources (direct light as well as reflected light) get into the lense and onto the chip of the camera.

I have attached a pictorial analysis that enhances the 'beam effect' as well as a totally different image of the same effect - even much stronger. Those effects can be reporduced with nearly each digital camera directed at a light source. In the picture I did attach, the light source is also a refelction of the sun on the sphere-topped tower. This effect can me more brilliant or less and sometimes it is hard to catch it on the actual image even if it was visible on the LCD-screen of the camera - but it is still a digital effect. Sometimes only one light source causes the effect while others don't (and I have to admit, that I do not know why that is...) This seems to be also the case in some of your pictures, especially in the one picture of the series where the deer looks directly at the kamera and the cameras supportive light gets refelcted in his eyes - the eyes-reflection does not cause the 'beams'. 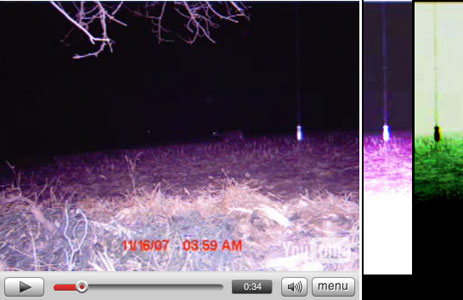 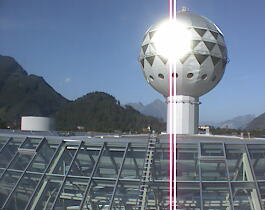 I am a studied graphic designer and am used to do picture analysis because my other profession is that I am a crop circle researcher and non-fiction author. Because of this I get many strange pictures with strange things that people want to know what it could be. You can find my crop circle homepage at www.cropcirclescience.org.

As said before, I do not know what the 'object' itself could be and have also no idea. But maybe the object itself has no own light but is only refelcting the camera's own light, which would mean that it has an appropriate surface composition. I also have the impression that the object is relatively close to the camera and in such a case it must be relatively small. But it could also be a larger object in a farther distance with a surface that is strongly refelcting...?

I hope this 'analysis' can be a bit of help in finding out the truth behind your images. I would be happy to hear of possible further relevations.

Thank you so much for taking the time to analyze the photo's. It seems you may have given us a good explanation for the light beams! The example you have sent clearly shows a similar effect. With your permission I would like to post these on my site, as we have many interested people who would like to study and learn from them. Of course credit will be given to you.

I hope we can learn what the image itself might be as well! Thank you once again!

Out of the many strange photo's viewers have been nice enough to send in, none have matched the unexplainable image...UNTIL NOW!

A gentlemen from Texas contacted me after seeing my spot with a report of the same image showing up on his deer cam July 21, 2008. 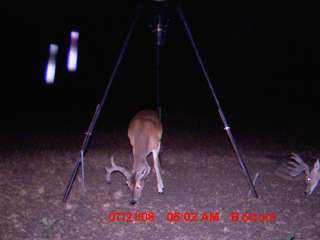 Following is our correspondence.

I have 3 Moultrie 4.0 game cameras on our place here in Central Texas that we have been monitoring since January. We have had 3 distinctive types of unexplained lights. First were round lights showing up in pictures that were nothing should be. Next came beams of lights that were above the ground but didn't touch the ground and on most occasions did not extend into the sky as high as the camera took the picture. This morning (July 21, 2008) at 6:02 am, with 2 bucks at the feeder, a small round light appeared under the feeder. The camera is set with an 8 second delay and 8 seconds later 2 lights resembling milk bottles (like the ones in your November picture) appeared in the picture. They look to be about 4 to 5 foot off the ground and just to the left of the feeder. 2 bucks under the feeder did not seem to be aware they were there. I have made copies of many of the pictures of lights we have seen. Have you been able to find out any thing on the strange lights, yet?

Bob, I'm no expert on this dang computer. Could only figure out how to send this one picture, but it's the one you were most interested in. We are located about 6 mi west of Salado, TX and about 15 miles south of Ft Hood, the free world's largest military base. Will try later to send some of the other types of lights. Harold

Bob,
You are free to use it as you like. I certainly would like to find out what is happening. Let me know anything you find.
Best of luck,
Harold