The weather continues to be mild for this time of year in Whitetail Paradise!

Bob finally exacted some revenge on coyotes for their earlier antics! While working in his home office he was alerted by little Bobby to the fact that Ole Wiley was sauntering through the yard at mid-morning. A mad dash for the 22-250, a fling of the window, and a 150 yard perfect shot on this departing varmint resulted in one less coyote in Paradise! Reinforcements are on the way for some late season calling sessions... we'll keep you posted. 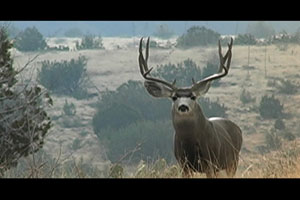 A quick trip to Arizona resulted in some awesome mule deer memories! Bob and friends met up in Phoenix with bows and arrows at the ready. Several stalks on mature bucks were thrilling for these Whitetail Hunters.

One buck in particular was truly a Monarch of the West! His harem consisted of many does, and several bucks that also traveled with the group. On one memorable day they located, and spent the entire day, following and observing a super, fully mature 4 x 4, with obscenely tall, heavy and wide antlers.

We actually were in bow range twice, in full sun, but the only shots taken were with the video camera as we elected to pass up these opportunities.

The ATA Show in Atlanta afforded the opportunity to have several veteran Mulie hunters guestimate the score of this perfectly symmetrical typical monster buck caught on camera. Estimates ranged from 185" to 200" with very few deductions. We'll have to figure out a way to include this surreal footage in a future BWP segment... We wish Whitetail hunting could be that easy!

Friend and neighbor Darren Burke tagged the oldest deer of the year during our Shotgun Season. Based upon tooth analysis by WAL, this old doe was an incredible 9 ½ years old! Great job Darren!

On to the deer report... can you say buck to doe adjustment? We rocked the section with quite possibly our record January doe harvest! Eddie, Rocco, George, Daniel, Jonathan, Bob & other guests accounted for an additional 12 does, 11 of which were mature! 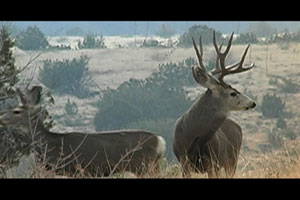 With careful examination and observation, we can learn a lot after a our tag is on a deer. All mature does carried at least 2 fetuses, with the exception of a single doe who carried only 1. Interestingly, 2 of these does had 3 fawns with them, and one carried 3 fetuses! All fetuses were of very similar size, meaning all of these does were bred very close in time to each other. A great indication of a healthy, well-balanced deer herd, with a very tight breeding time frame. Reproductive rates are top notch here, with no mature does being found to be barren of fetuses.

So what does this mean to us, and our hunting? By consistently targeting the doe segment of our population year after year, we are achieving balance within our herd sex ratio. We are harvesting many more does than bucks. In a typical year we shoot 4 does or so for each buck. When you consider that we are tagging quite a few mature bucks from our patch of Paradise, you can realize just how many does we continue to tag each year.

Our rut hunting is enhanced year after year due to our habitat work, and continuous doe harvest. A very visible rut, including buck sightings, scraping and many rubs are observed. See Building Whitetail Paradise Volumes 4a & 4b. Regardless of how relentless we are in pursuit of does, recruitment of fawns remains strong and even possibly increasing!

I believe that research reported on orphaned buck fawn dispersal is accurate. It is said that orphaned buck fawns predominantly stay close to their birth area, and have a smaller home range than bucks whose mother survived. In Volume 5 due out this year, you will see a segment on censusing that we did here, and it will blow your mind on several fronts! We will relay buck population density, and age class distribution numbers, along with documentation photos.

Holding deer on your property affords many benefits to us hunter managers, not the least of which is the opportunity to observe many bucks year after year as they grow to maturity! Check out Bob's song sample "Watchin' Him Walk" in the entertainment section of our web site for a very cool take on this indeed!

Now that deer season is in the rear view mirror, it's time to begin our habitat efforts. Timber Stand improvement, native grass burns and other projects are scheduled to begin soon. We'll keep you posted...

Is it easy to achieve incredible hunting action year after year? No, but it is priceless, and we wish you success with your management efforts... Building your own Whitetail Paradise! Untill next time...