Wolves have begun appearing once again in Illinois with startling regularity. A friend called Bob Coine of Building Whitetail Paradise, and Heartland Studios, Inc. regarding a picture from his trail cam on March 9th, 2010 that looked like it contained a wolf. 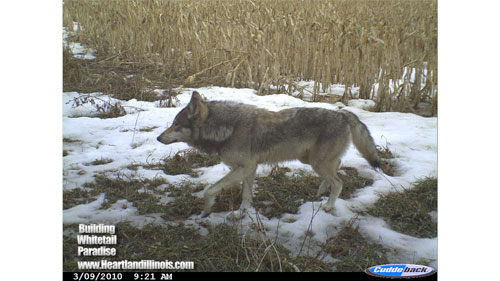 This may be the first photo ever taken of a live, wild Gray Wolf (also known as a Timber Wolf) in Illinois!

"At first glance, I thought it was a big male coyote, but after comparing other photos from the same camera containing deer and coyotes, I became suspicious that in fact it was a wolf," Bob said. "I called an IDNR Biologist Supervisor whom I have known for a long time, and asked him to take a look. He shared it with his staff, and the folks in Springfield. A collective unanimous opinion was reached that it does in fact appear to be a wolf," Bob stated. 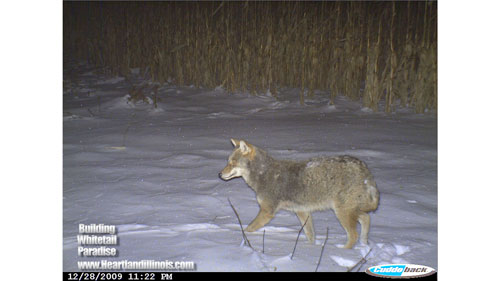 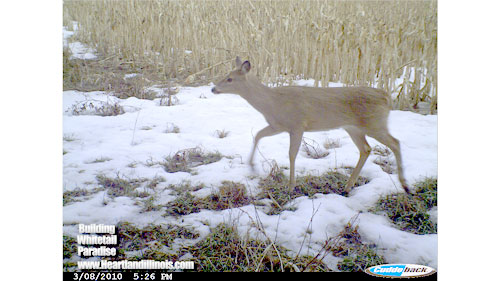 "I have mixed feelings about wolves populating our area", Bob said. "As a landowner who works very hard to establish and improve habitat for wildlife, it's exciting knowing that your labor attracts diverse species. In addition to our normal inhabitants like deer, turkeys and coyotes we have been seeing a marked increase here in bald eagles, and even a recent golden eagle." But when an apex predator like a wolf shows up, as a parent I am concerned that my young children and their friends may look like an easy meal to a hungry wolf." 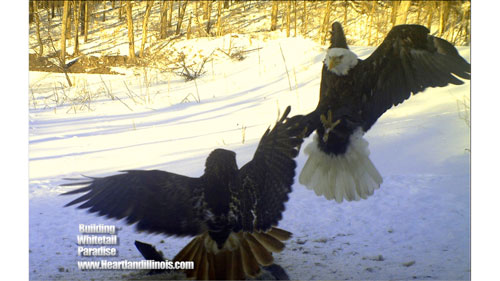 Bald Eagle attacking a Red Tailed Hawk on a deer carcass at the Coine Farm.

"Through my television work, and the Building Whitetail Paradise DVD Series I have reported how coyotes can impact prey species such as deer. We have coyotes here that hunt as a pack, and I've witnessed and documented this behavior. I am concerned that should wolves become more populated near urban areas, that people could become part of their diet, especially so since they are protected and could lose their fear of man," Bob said.

"This has occurred very recently in a beautiful location I enjoyed staying in while moose hunting in Alaska, where I also enjoyed seeing wolves and brown bears. Seeing these large predators, and witnessing the speed and power they possess up close and personal strips away any ideas of these creatures co-existing in populated areas," Bob stated. The real world isn't a Disney movie.

A March 12, 2010 article in the Anchorage Daily News drives home the very real danger of living in close proximity to large predators. A woman out for a run in Chignik Lake, located on the Alaskan Penninsula was attacked by a pack of wolves. According to Troopers Director Audie Holloway, Troopers investigating the scene found many wolf footprints around the body and bloody drag marks in the snow, he said. Berner's body had been partially predated and had teeth marks on the throat, which was severely damaged and was the likely injury that caused her death, Holloway said. 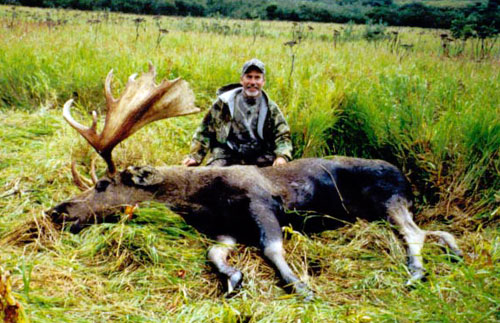 Bob Coine and his archery harvested moose shot near Chignik Lake, Alaska in 2001.

Investigators were able to conclude after the autopsy that the animal injuries caused the death and were not inflicted post-mortem, he said.

"Wolves, just like big cats, usually attack the wind pipe area and try to control the victim that way."

It appeared the attack was predatory, motivated by wolves wanting something to eat, he said. 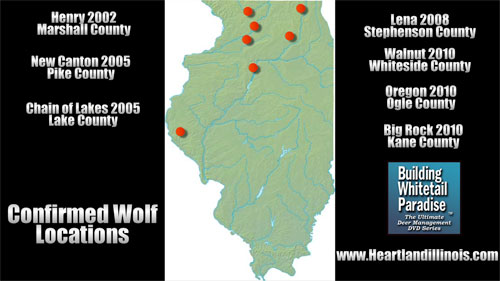 Wolves have been confirmed in these 7 Illinois locations.

I spoke with IDNR Police Captain Greg Hunter as well as Tim Santel & Pete Fasbender of the USFW who all confirmed wolves are protected in Illinois under Federal law as an endangered species. Their additional background on the wolf is greatly appreciated.

Clearly we hunters are going to need to closely scrutinize canines before squeezing a trigger. A large male coyote can weigh 50 lbs. or so, whereas the largest male wolf can reach 175 lbs. Unfortunately both wolves and coyotes can and do have color variations, which doesn't make their color characteristics a good predictor when try to identify them in the field. Both have thick bushy tails similarly proportioned for their bodies, and making things more challenging yet, young wolves are the most likely dispersers, so they won't be as large as older wolves.

With all the above ID information, I can understand how Illinois hunters can (and have) misidentified wolves as being coyotes. Non-hunters may not realize how challenging detailed animal characteristic identification can be, when making a harvest decision under pressure. Game animals don't typically stand by for very long, and are camouflaged for a reason.

Just last year I misidentified a doe at long range, and made a nice clean shot. I was shocked when that doe turned out to be a young small-spiked buck, and just like that...I was done buck hunting for the year, having harvested my target trophy buck earlier in the season.

I encourage all Illinois hunters to do their best utilizing resources such as the internet to learn about wolves, and coyotes. Then do your level best to make an ID before squeezing a trigger. I also encourage wildlife law enforcement officers to be reasonable when innocent mistakes are made and hunters alert them to the fact that a wolf has been shot. Knowing a wolf is/was here is valuable information for wildlife managers. Should hunters hesitate to report an accidental wolf kill for fear of heavy penalties, after making an honest mistake, and be branded poachers...I think it would be a shame, and we may hear less about our new resident wolves in our midst. 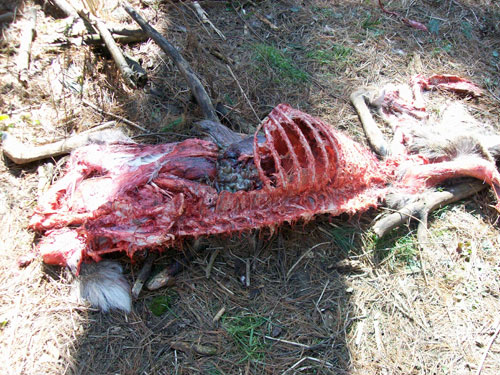 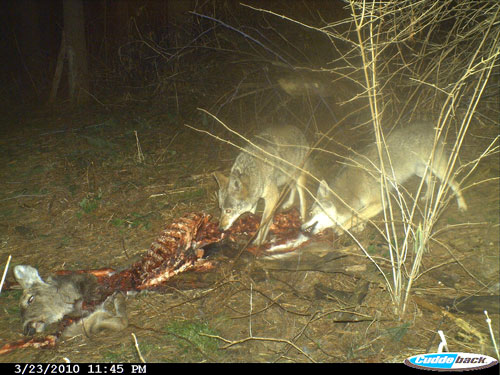 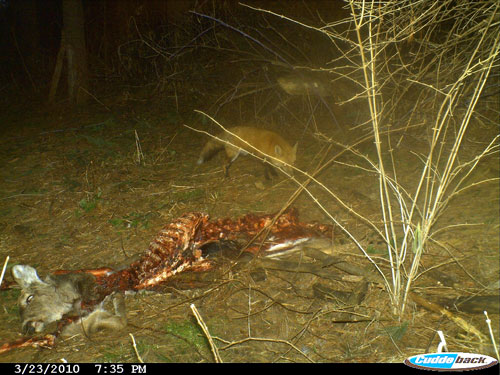 First night visitors to the stripped carcass were numerous Coyotes and a Red Fox.

Recently wolves in Alaska have attacked dogs being walked on a leash.

This map from The WI DNR depicts gray wolf territories for Wisconsin in 2009.

Wolf Territories determined by radio tracking: These represent the outer boundaries or polygon of radio location points obtained on one or more radio collared pack members, usually from mid April through mid April. Most territories were determined from 20 to 50 radio locations obtained by aerial radio telemetry. Isolated radio locations of >5km (>3.1 miles) from other locations were assumed to be extra-territorial moves, and were not included with the designation of the territory boundary of the pack.
Approximate Wolf Territories: These represent approximate territory boundaries based on observations of field sign, (scats, tracks, urinations, kills, beds, howls and sometimes dens), as well as agency and public reports of wolf observations. These territories represent areas of similar size and habitat conditions observed in radio tracked packs. 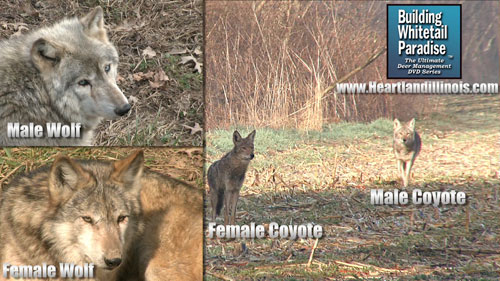 These images are from HD Video footage shot by Bob Coine/Heartland Studios, Inc.