A wild and zany Comedy series featuring Bob Coine and George Noble as the Deer Guys! Join Bob and George as they tackle difficult challenges with a deer hunter's mentality and common sense! 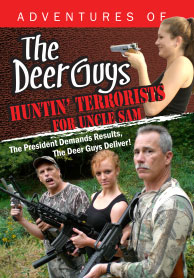 Adventures of The Deer Guys

The Adventures of The Deer Guys is a lighthearted comedy, portraying life's challenges being conquered with a deer hunters mentality, by deer hunters.

The kick-off adventure features The Deer Guys being recruited at the Governments highest level to capture the terrorist leader! Join Bob Coine and George Noble in the exciting hunt, with the full support of the President himself! An aircraft carrier, fighter jets and a stealth aircraft are but a few of the tools required!

Andrea Larsen stars as the CIA Station Chief assigned to assist The Deer Guys. A terrific cast, soundtrack and musical score make this adventure a pleasure to behold! 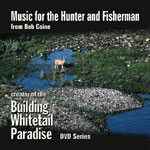 Music for the Hunter and Fisherman

Music for the Hunter and Fisherman (audio CD) is a unique collection of original songs, envisioned by Bob Coine, and performed by very talented recording artists. Bob's creative storytelling through songs, add a new dimension to outdoor appreciation, especially when you'd like to be there... but can't.

The blend of exceptional music and lyrics relay a wide variety of experiences, all of which just so happen to relate to the outdoors.

Click the MP3 logo to play a song sample...